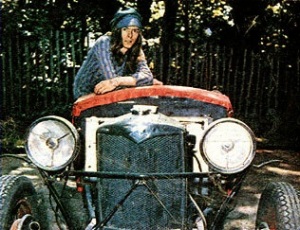 Bowie’s Riley car, Rupert, proved not to be as fond of its driver as he was of it. As Bowie explained in an interview with Dominic Mohan in 2003:

“It was an old racer from the.. you know, I think it probably goes back to the thirties or something and a mate of mine and me had put it together – not very well as it happens – and it stalled outside Lewisham police station one day.  I had really long hair in those days so I was standing round the front of the car, trying to pump it back into life again and all the cops were at the windows laughing at me and the bloody thing started up and I’d left it in first gear and it came at me (laughs).  The crankshaft went through my leg and I was pumping blood like a fountain and I broke both my, well I cracked both my knees as the bumper had kind of got me pinned to another car that was just behind it. sold it as soon as I got out of Lewisham Hospital. The most fortunate part is that it was the police station where I broke down. I was bleeding profusely, but their medics were on the street in about 30 seconds flat. “

—–“Always Crashing in the Same Car”

“Always Crashing in the Same Car” is based on a real experience of not exactly road rage, but close to it. According to Thomas Jerome Seabrook’s Bowie in Berlin, angry with himself, Bowie sped round and round a Berlin hotel garage with Iggy Pop in the passenger seat psyching himself up to crash into a pillar. He had the good luck of running out of gas before he could do himself damage.

Off the road in Australia

On the Australian fansite Bowie Down Under, you can read a Rolling Stone article about the making of the “Let’s Dance” video and view a number of pictures of the Thin White Duke outdoors, in the sun, shirtless and in shorts. And if that isn’t incongruous enough for you, consider this: Bowie

“first came here in 1978, on his last concert tour, and at each city where he did a show he would rent a Land Rover or some similarly rugged vehicle and clatter off into the outback, the parched and haunting bush.”

and on the road in LA…

Still, as “parched and haunting” as the bush might be, Bowie was surely at less risk then and there than he was in 1975, driving around the winding canyon roads of Los Angeles in a borrowed VW. The man must have been guarded by legions of angels.

In Kevin Cann’s Any Day Now I read that George and Brigit Underwood accompanied David and Angie when they sailed on the QE2 for the Ziggy Startdust tour, and that the first night at sea, Bowie came to the dining room in Ziggy mode. After that, he took his meals in his cabin.

There’s a picture of the Underwoods with Bowie on the Super Chief in 1972 at the Ziggy Stardust Companion.

And finally, another reason not to fly:

The Labyrinth’s Hoggle somehow got left behind on a flight and now  “permanently resides in the Unclaimed Baggage Center Museum” in Scottsboro, Alabama, according to It Happened in Alabama by Jackie Sheckler Finch.