The New York Times’ Dwight Garner is looking for suggestions: “Help Us Compile an Alternative David Bowie Playlist.” He explains in the July 22, 2011, piece that “I wish to compile a Bowie playlist that omits the hits — ‘Heroes,’ ‘Young Americans,’ etc. — yet resonates perhaps even more mightily.”

It occurs to me he could have turned to Bowie’s own such list, the tunes he chose for ISelect, a CD that was included in the British newspaper The Mail on Sunday on October 8, 2008.

I thought it would be fun to look for some other lists. Here are the top ten of the 50 songs William Higham discusses in “Fifty Ways to Love Your Bowie”  for Rock’s Backpages, October 2002.

Higham’s choices for slots 11-20 are Beauty and the Beast, Win, ‘Heroes,’ Stay, Queen Bitch, Watch That Man, Teenage Wildlife, What In The World, Right, and Soul Love.
I’m fond of a blog called The Flying Lobster. Its writer discusses each song on Bowie’s albums and then rates it on a 1-10 scale. These are his perfect tens, in chronological order.

The albums he gives a perfect ten are Station to Station, Low, “Heroes”, Rise and Fall of Ziggy Stardust and the Spiders from Mars, and Hunky Dory.

I have to admit that one reason I’m fond of the Flying Lobster is because this is the only other place I’ve seen someone write with utter dislike about “I’m Afraid of Americans,” a song I also abhor. Flying Lobster gives only three songs a rating of 1:

When NME.com asks its readers to come up with their top 20, the results were: 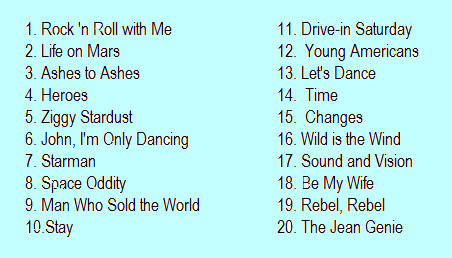 Uncut Magazine took a different approach. Its lead for June 2008 was “Bowie: His 30 Greatest Songs”; the article’s sub-title tells us they are “as Selected by His Friends, Fellow Musicians, and Some Big-name Bowiephiles” but not how the ranking was determined. They are numbered, however. Here they are, 1 to 30: 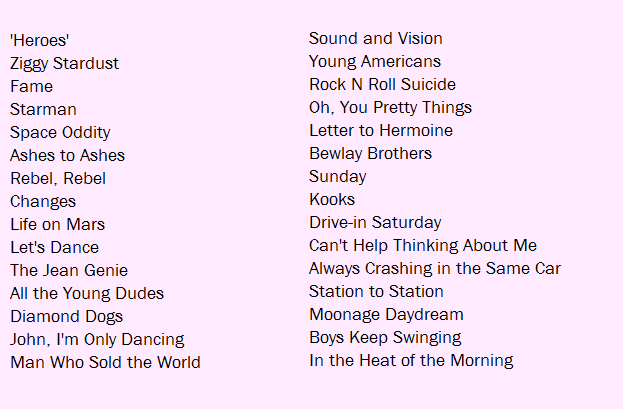 Any commonalities or anomalies?

Other than “Rock N Roll with Me”, the NME poll is fairly standard stuff.

“Lady Grinning Soul” made Bowie’s ISelect, The Flying Lobster’s, Higham’s and bowienet’s list, but not Uncut’s.

“Life on Mars?” makes all the lists, except for Higham’s. It isn’t among his top fifty. He considers it, along with ” Ziggy Stardust,” one of  Bowie’s “second-rate-Art-student-postmodern-mime-artist attempts.” Similarly, “Moonage Daydream” doesn’t make his top 50 (“belaboured sci-fi”), and it didn’t make the NME list.

Everyone likes ‘Heroes.’ It isn’t on Bowie’s ISelect, but because he deliberately wanted to choose some of his less often anthologized pieces, this doesn’t mean much (except perhaps I shouldn’t be including the ISelect list with these others).

Only the bowienetters chose “Five Years” and “Cygnet Committee.”