The “androgynous Ziggy Stardust” is so commonplace a description of the leader of the Spiders from Mars that it seems to be indisputably correct.

But repetition of a characterization doesn’t make it right. 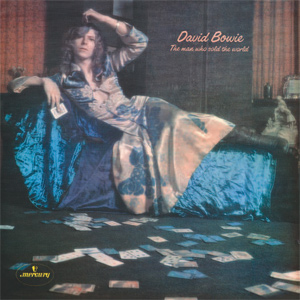 On the covers of The Man Who Sold the World and especially Hunky Dory, Bowie’s appearance is androgynous. With no prior knowledge, at first glance one might think that the person on the cover of The Man Who Sold the World is a female; on second, the figure is obviously a man in a dress. With nothing to go on but the front cover of Hunky Dory, my guess is that many — maybe most — people would maintain, even after a good long look, that they are seeing a woman.

“Don’t know if you’re a boy or a girl”: that’s androgyny –at least of the quite literally superficial variety.

In contrast, could anyone 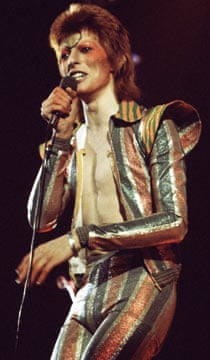 seriously believe that Ziggy was a woman?

This Ziggy picture is not Bowie at his loveliest, but consider the Adam’s apple, the chest, the crotch. What is androgynous here? Make-up?

Ziggy wasn’t androgynous at even the basic level of not being obviously male or female.

So what is special about Ziggy?

The same thing that was consistently true of Bowie: his extraordinary sexual magnetism. And this extended to gay guys, straight guys, bisexual guys and women, straight women, gay women, transgender, and the questioning (before such a category was even suggested).

Is there any other man so widely revered by both men and women for his sex appeal and beauty?

The point of Ziggy was transcendence. Bowie’s earlier androgynous personas were self-limiting because they were not inclusive. On Hunky Dory, Bowie is a man who attains idealized feminine beauty, something few women can achieve, and something that would be counter-productive for a straight male to seek. Androgyny, in other words, depends on accepting that there are feminine and there are masculine traits.

“Oh no love, you’re not alone
No matter what or who you’ve been
No matter when or where you’ve seen
All the knives seem to lacerate your brain
I’ve had my share, I’ll help you with the pain
You’re not alone”  — Rock & Roll Suicide

I know gay males who were born in the 1950s who regard Bowie as their savior. I don’t pretend to be able to even imagine what it would have been like to grow up gay in the sixties and seventies — and then to have heard “Rock & Roll Suicide.”

Maybe Ziggy was gay and maybe he wasn’t. What is clear is that he wasn’t “masculine.”

I also know straight males who found in Bowie an aesthetic perfection that they sought to emulate, in spite of being teased and taunted. It would have been easier for them to dress like their “masculine” peers, to leave off the clear nail polish, etc. but I think that for many of us who grew up knowing we were too young to have been at the forefront of social change, that is, we had missed the sixties, the mass demonstrations were replaced by small scale, even personal, rebellions.

“No matter what or who you’ve been”: In the Bowie-verse there were no losers.

When I was a teen, football players and soldiers were at the apex of a very limited range of acceptable manifestations of the masculine. (I think things are better now. I hope so.)

And aggression and violence, while not inevitable components, seemed always to be brewing just below the surface in these manliest of men.

Bowie’s appeal to straight females discredited the presumption that rough and tough were the aspects all women require in a lover. Whether you call what Bowie’s Ziggy was attempting to do rejecting, refining, or redefining masculinity, it couldn’t have occurred without modifying femininity.  In Ziggy’s universe, not making the cut for the cheerleading team didn’t mean a woman was less feminine than the chosen few; she didn’t have to measure up to the standards of the homecoming queens, there were other kings waiting for her.

In this respect, Ziggy was anti-androgynous. Blurring the feminine and masculine diminishes the range of both.  Ziggy came to smash the stereotypes and expectations, and to see where the pieces fell.

Even Ziggy’s size was a relief to a number of us women. He was small; he seemed safe (and I believe Bowie found brutality as despicable as “Repetition” suggests [this is the one Bowie song I cannot listen to]).

My experience — by no means unique — was that the more Bowie-esque a man is, the more likely he is to have an interesting mind and to be a gentle man.

Make way for the homo superior.