Bowie’s Lazaruses (Blackstar’s and the musical’s), Anna Kavan’s, the beggar Lazarus, Lazarus of Bethany: I’ve been thinking about Lazaruses a lot lately.

“I’m a dying man who can’t die”–  David Bowie and Enda Walsh, Lazarus: A The Musical

We know Thomas James Newton can die; he is mortal. That, after all, is why he is on Earth: he came in search of water because his own planet had become too dry to support life. His family is dead. His problem is not that he cannot die but that his life has become unlivable, suicide doesn’t seem to be an option, and his body doesn’t run on the same timetable as humans’. In the last scenes of The Man Who Fell to Earth, Nathan Bryce and Mary-Lou have aged some 20 years, but Newton has not. His liver must be superhuman: he has failed to drink himself to death, while Mary-Lou and Bryce seem well on their way.

I’ve not seen the musical; I’ve only read the screenplay, but my impression is that it ends with Newton finding what he wants, and that is to be free from life on Earth. Any play ending with “Heroes” can’t be as bleak as the videos for Blackstar.

“Mr. Bow did not know how lucky he was and perhaps that was rather lucky as well” —  Anna Kavan, I am Lazarus. 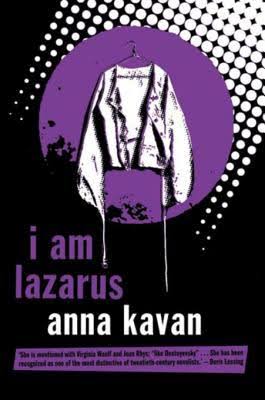 Patti Smith casually mentions Anna Kavan (1901-1968) in M Train — just her name, nothing else. I don’t know if Bowie read Kavan, but he and Smith admire many of the same writers (e.g. Jean Genet). It is hard to overstate how bleak and disturbing it is to read Kavan’s I am Lazarus, a collection of short stories. It’s a slim volume, but a long read.

The title story and several others feature broken people subjected to aggressive medical interventions (inducing insulin shock to “cure” praecox dementia; repeated dosing of paraldehyde for “prolonged narcosis” of neurotics [a visitor describes a patient as a ”shape…who had already seemed to forfeit humanity” (“Palace of Sleep”)]. Others have survived WWII to live with the memory loss, terror, and confusion of PTSD.

All could claim to have “scars you cannot see” — if they had the ability or desire to communicate. Helpless, institutionalized or too shattered to realize they are dead inside, they both are and are not alive and have no way out.

Lazarus the beggar and Lazarus of Bethany have two things in common: Both die of illness, and neither speaks for himself.

Lazarus died of leprosy at the gates of a grand house where he begged for scraps from the table of a “certain rich man” and was refused. When Lazarus died, “the angels carried him to Abraham’s side.” The rich man also died and was buried.Lazarus is at rest; the rich man lands in Hades where he is tormented and can see Lazarus.

Now he’s the one begging. He wants Abraham to send the leper over to his side to give him a drink of water, but the rich man is no longer giving the orders, and even if Abraham were to agree, it couldn’t happen: “‘a wide chasm has been fixed between us, so that those who want to cross from this side to you cannot do so, nor can they cross from your side to us’” [31]. Then the rich man decides the beggar should be sent back  to the world of the living so that he can warn his uncharitable brothers what awaits them. Abraham refuses, saying even if he did so, the brothers wouldn’t listen to the beggar.

So much for worldly wealth and power. I find several other interesting things about this. If the rich man recognizes that the man beside Abraham is his beggar, so to speak, would that mean that even though the angels came for him (the rich man is simply buried), the leper appears just as repulsive as he did on earth? Now the beggar is at rest. Were he sent on the rich man’s errand, would he have to repeat the process of dying? Is he not better off dead?

This Lazarus is the brother of Jesus’s friends Mary and Martha, so he is a young man when he dies after a short illness. He [his body?] is put in a tomb, and Jesus arrives in 4 days, the stone blocking the tomb is  rolled away, and Jesus calls to him. Then “the dead man came out, his hands and feet wrapped with strips of linen, and a cloth around his face. Jesus said to them, ‘Take off the grave clothes and let him go’” [44].

And that is the last we hear of him, but there are a number of legends about the rest of his life. Perhaps he was set out to sea and landed in Cyprus, establishing a church in Larnaca where the story arose that he lived another thirty years but

never smiled except on one occasion, when he saw someone stealing a pot, when he smilingly said: “the clay steals the clay.” He was worried at the sight of the unredeemed souls he had seen during his four day stay in Hades.

A Gnostic teaching (and we know Bowie was interested in Gnosticism) claims Lazarus and the Apostle John are one and the same, “the only disciple to receive all teachings and initiations of the Holy Gospel, outer, inner and secret,” and that these secrets were revealed to him when Jesus entered the tomb and raised him from the dead.

Once dead and resurrected, can one die again? I’m not sure if the following is limited to one community of Gnostics, but it is intriguing:

St. Lazarus lives in remote places and wanders the earth in secret, immortal and indestructible. According to legend, he receives one or two disciples in every generation to whom he transmits the inmost secret teachings, serving as a guardian and knowledge-keeper of the Light-Transmission on earth. . . .Though many might think of him as an old man, legend speaks of him as a young and very handsome man, and he is often called the Eternal Youth or the Hermit-Lad.. . .

He is youthful and has a beautiful boyish face, appearing as though he were sixteen, though having pure white hair. His eyes are unearthly in appearance, as though the universe is in them and his gaze seems otherworldly.